In this blog we talk about the importance of video on your website. Whether you are a business owner, a one-man show, or a person or group promoting a cause, whatever your website may be, video can play a major role in getting your message across. We asked some of the biggest players in website development in our area some questions to get to the core of this topic. Read more to see what they had to say. 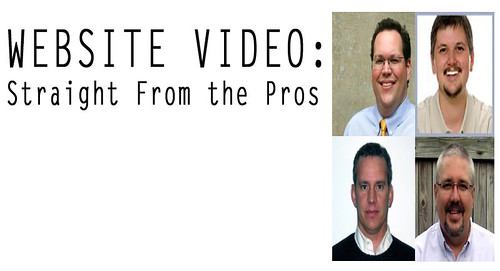 To learn more about the role of video on a website, we interviewed several of our area’s top website producers and marketing professionals:

and Steve Wolgemuth of YDOP.

Tom Malesic feels strongly that, "for most businesses, video is probably the most critical thing they really need to consider for their website." People "would rather watch video than read content," he adds.

"Video is extremely important if you would like to immediately capture your visitors’ attention and have them become become fully engaged with your message," says John Stauffer.  All of our subjects were in agreement here. As Steve Wolgemuth puts it, "video can be an extremely effective medium for a website, particularly for certain types of sites and audiences." "We find that its a great way to communicate a more complex message," says Andy Garman.

Pipedream Studio, for example, recently added a series of videos to the website of a manufacturer with somewhat of a complex product, which explain to customers how to service and clean the product. Here, Pipedream and the manufacturer took an in-depth process and made it easier to understand through video. "We could have explained in text," as Andy points out, "how to fit part A into part B, and the visitor could figure it out with some effort, but demonstrating how to do so with video makes it a lot easier for the end user to really understand."

Q: What are some successes you have seen when it comes to website videos?

YDOP’s Steve Wolgemuth’s story begins with an e-commerce site. Steve had a client who was having trouble communicating clearly the pricing of his products. Steve suggested a video consisting of a clear explanation. The end product was a 60-second standup in which the client clearly and concisely described the pricing and options, paired with some added visuals to hold the viewers attention and further clarify his message. "The result was a home run," says Wolgemuth.

Something to keep in mind when posting a video on your site: in most cases, it is best to keep it brief. YDOP’s client’s video lasted only 60 seconds – just enough to be clear while also keeping the viewers’ attention.

When Andy Garman worked with the American Music Theater, the venue would post videos of past shows and performances on its website. These videos were viewed tens of thousands of times, and Andy believes that this helped the AMT twofold: to attract new customers and generate interest in their shows, and to excite established customers. Potential customers who visited the site were able to watch past shows and see what kind of experience they were about to buy into. The videos also drew additional potential customers to the site from different social media platforms such as YouTube, where they were posted as well. More traffic ultimately lead to more sales. And while the videos helped to gain more customers, they also helped to "extend the customer experience" as they allowed the existing customers to "relive the enjoyment and share the experience with their friends." To this example, the Entertainment Industry is another area in which video works quite well on company websites, and is recommended.

Flash Avenue’s customers notice an increase of word-of-mouth advertising as well, with the help of engaging videos that users share with their friends. Stauffer also points out that videos make the user experience more successful because they, "deliver a marketing message through all 3 forms of learning; video, audio and touch(pointing/clicking) interaction."

A more measurable observation of success that Tom Malesic has seen is "an increase in conversion rate" on sites. Through watching a video, the visitor or potential customer gets "a much better understanding of who the company is," giving him or her more of a reason to trust and make a purchase. And if the owner is part of the video, it is almost as if the visitor has actually met that owner. That particular element adds "instant credibility."

Q: What are some dos and don’ts that you suggest to your clients about video on their websites?

As we saw in the above example, extending your video to social media sites like YouTube, Facebook, Vimeo and more can really boost views and traffic to your site. Andy Garman always suggests to take advantage of all applicable platforms. He says, most importantly, to post your videos on YouTube, or better yet, create a Youtube channel. You do not need to pay to show up on a YouTube search, so those people interested in a topic that relates to your business can stumble upon you this way.

Something to consider, according to Flash Avenue’s John Stauffer, is volume. "Avoid dramatic volume changes throughout the audio portion of your video. Sudden loud bursts can be extremely annoying and disruptive." Keep in mind that visitors want to have a pleasant experience!

Another strong recommendation from Stauffer to help assure that the user has a pleasant visit: "consider your potential viewers situation before deciding to have your video start playing automatically." "Situations where auto-play is appropriate," says Steve Wolgemuth of YDOP, are almost non-existent. YDOP strongly recommends against auto-play. Use of this function causes a few problems: it startles and annoys some visitors (notably those at work, as Stauffer points out), and a visitor can miss a very important part of your video if they aren’t ready to click play. "Give them the option," recommends Stauffer.

That being said, a second recommendation from Wolgemuth is to create video that is, engaging right from the start. The best online video, in the first ten seconds, convinces the viewer that it is worth watching. This is another reason why you dont want to have your video auto-play the beginning is the best part! Online viewers are a fickle audience, says Wolgemuth, and you can be sure theyve got a hand on the mouse ready to leave during the entire movie. For this same reason, YDOP encourages their clients to,

Tom Malesic tells urges his customers to have video content "reflect [the] company image through the process." In other words, make sure the visitors can relate to your company by keeping your video, "real." A good example for this is with video testimonials. Malesic thinks "getting an overwhelming amount of video testimonials" is a real "critical piece." "Don’t let them read off a script, don’t let them think too much about the question," he adds. The more they stutter and say "um" like normal people, the more the viewer can relate and believe what they are saying. "Be real!"

Q: What do you see is the future of video on websites that you design?

Wolgemuth, Garman, and Malesic have the same vision: as Andy Garman puts it, thanks to increasing bandwidth and faster internet speeds, its becoming easier for web surfers to view and interact with high-quality video online. With that being said, businesses will be expected to have higher quality video on their sites. Surfers will become less tolerant of bad video, in the same way they have become less tolerant of bad websites over time, says Wolgemuth. Website videos will almost certainly become more prevalent and more visually appealing.

Tom Malesic takes the future a step further, "I think websites are going to be almost predominantly video at some point. I think it’s going to be like a TV show about your business."

What do YOU think is the future of online video?