Video and stills have always been intertwined. But over the last few years, Canon has brought the two media forms even closer together. And although some professionals prefer DSLRs, Canon has yet to release a full professional cinema camera. But could Canon change the video industry with their November announcement? 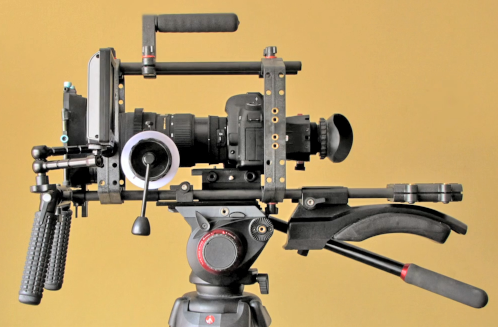 Since the creation of media, stills and video have always been intertwined. And Cannon continues to bring the two closer together.

When Canon came out with a DSLR that shot full HD video in 2008, it started a trend of camera companies merging stills with video. And now as video continues to evolve, no longer can a company focus solely on photography.

By 2010, Nikon, Panasonic and Pentax all released DSLRs capable of shooting high quality video. And although not a professional video camera, some filmmakers were (and still are) using these DSLRs because they do provide some advantages to camcorders.

Panasonic came out with what was supposed to be the solution for DSLR and video with the AF100 in 2010. And reviews

were mostly positive, but it was still not perfect. There wasn’t a variety of lens choices, and lenses from other cameras lost half of the field of view.

Sony released it’s competitor to the AF100 earlier this year. The FS100 also received strong reviews but the camera lacked ND filters and HD/SDI output. And the "perfect camera" was still not in existence.

Canon continues to bridge the gap between video and stills with its release of the 1 DX earlier this month— Canon’s best DSLR yet. But rumors have been floating that Canon isn’t done revolutionizing the video industry this year.

Many believe Canon will release a full professional video camera in early November at a convention in Hollywood, CA. The camera would not be a DSLR, but rather Canon’s first venture into the full professional cinema camera world.

Above is a video comparing many DSLRs. Which camera do you prefer?