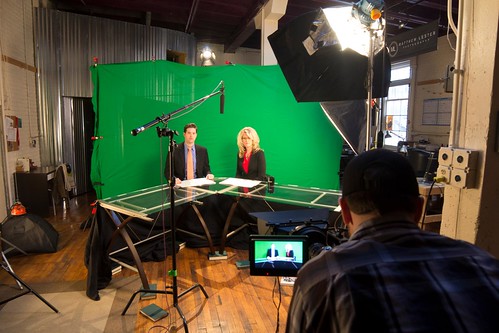 In this month’s Client Spotlight, we’ll be discussing a commercial that we produced just a few weeks ago. We had the pleasure of working with Dave White and Walt Ali from Kitchen Encounters/Paragon Design and Construction. The commercial that we filmed with them was based on the idea that a newscast has just cut to a commercial and we the audience "catch" the anchors talking behind the scenes. While loosening his tie, the Male anchor (Ryan Shank) asks his female counterpart (Joell Ketcham) how her kitchen renovation was going. She goes on to discuss that it went so well, that they hired Kitchen Encounters to build them a family room addition. Not knowing that they did work beyond the kitchen, the male anchor is surprised to hear that Kitchen Encounters would be building this addition. Our female anchor then tells the male anchor that Kitchen Encounters has launched a new division of the company called Paragon Design and Construction. Next, from off camera, we hear the cameraman say "action and the anchor breaks in with this new information about Kitchen Encounters/Paragon Design and Construction. As the graphic screen comes on, we realize that this is a produced commercial and not a conversation "caught" on air.

This commercial was one of my favorites to edit, the reason being… Graphics. I love working with graphics because they make projects more challenging and interesting, not to mention more visually stimulating to the audience. For those of you in the "know", you realize that this entire commercial was filmed on a green screen. For the sake of letting everyone else know how we did this, lets get into the green screen process a bit. When we film on a green screen, we have the ability in post-production to "key" out the green or remove the green from the shot, which will leave us with what is called an "alpha channel." This alpha channel is basically a transparent layer that we can use to composite graphics behind our main subject(s). Essentially, with this method we could throw our subjects right into the middle of a tropical beach scene or show them broadcasting "live" from the Eiffel Tower without ever leaving the comfort of our studio. Why green?? Well, allow me…green and dark blue are the two most popular colors used in this process because they are the two colors that are the furthest from skin tone. Could you "key out" red or yellow or orange??? Yes, you can… but if you think about the colors of skin tone, clothing, hair…etc., you would realize that if we set the program to take out one of those colors, not only would we be taking out the background, but we would also be taking out parts of peoples faces and clothing. Sounds fun… but not exactly what we were going for here. So, that’s why we use green or blue.

So what we did was keyed out the green screen and in its place we put in a virtual news set. The only things that are physically "real" on this set are the anchors, desk, chairs, and the anchors papers. The rest are graphics that we have composited onto the screen. When all is said and done, we’re left with an ultra-realistic looking commercial that leaves you wondering what exactly you just saw… was it an error by the station where they forgot to cut?? Or was it just an awesome commercial that was made to grab your attention?? See for yourself! The Kitchen Encounters/Paragon Design and Construction spot can be seen airing on WGAL.