Lets face it: after posting photographic evidence of every night out and better-than-average lunch for the past few years, your mobile uploads folder on Facebook is probably more clogged than the New York sewer system. Like everyone else in our plugged-in technocracy, you want to show your friends just how adorable Mr. Cuddles looks in his new, hand-knit cardigan and bask in their awwwws and too cutes, but you’re starting to realize that you’re probably not going to revisit this priceless moment two years or even two months down the road. How do you share your laugh-worthy or possibly triumphant moments with the world without feeding the clog?

Enter Snapchat, a breaking-big startup that turned two in September and boasts millions of users in the coveted young adult demographic. While other picture-based apps such as Instagram and Flickr encourage users to create highly personalized and carefully planned streams, Snapchat forces users to live in the here-and-now by putting a 10-second time limit on photos and videos. Once those ten seconds are up, the photo/video disappears into the pixilated ether, unless you post it to the newly-added story section, where it will be viewable for 24 hours with no limit on clicks. Snapchat also boasts text and paint options that lend it a sense of self-reflexive playfulness and further distance it from Instagrams arty filter-mongering. 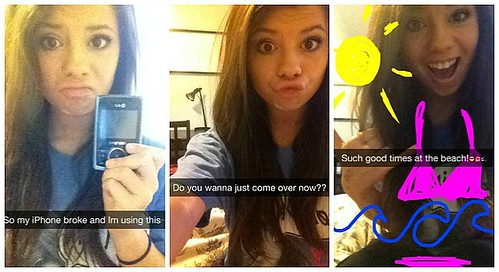 (And to think her grandkids will never see this!)

While sending intentionally-ephemeral photos may sound kind of silly, forward-thinking advertisers are already taking it seriously. A handful of companies, most notably Taco Bell, have been using the app as a means to connect directly with their customers. Through a mix of ads and consumer-participation offers (Snap yourself with our product, get a free coupon), they hope to gain a foothold in the 18-25 demographic, whose buying power continues to remain strong. Still not convinced that this is going to be a thing for a while? Mark Zuckerberg, the golden boy of Silicon Valley and no slouch in the things department, recently offered to buy the app for a cool $3 billion. Snapchat CEO Evan Spiegel refused and Facebook launched a knock-off app, Poke, soon afterwards. You may have heard about it. For about a week.

As far as origin stories go, its hard to imagine beat out Facebook leading to an early grave.