Ready to see some super slow-mo videos from AideMMedia?  Sony has just shipped its first set of the new FS700, and we are on board to receive ours in a few weeks.  See why we are so excited in this post! 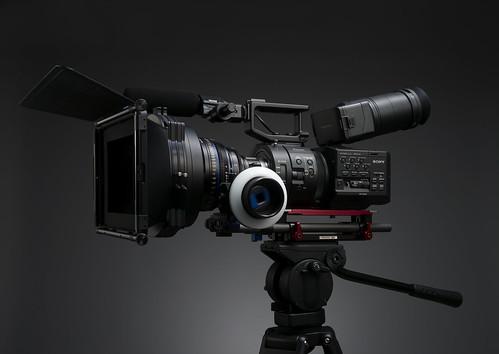 This June we will be getting our hands on our newest piece of equipment – the Sony FS700.  This new camera can shoot up to 240 fps in full 1080p HD, which gives us the opportunity to shoot some of the highest quality, ultra slow-motion videos ever.  Being some of the first people in the area to purchase the brand new model, we are very anxious to try it out.

Since the first motion pictures in the late 19th century, people have enjoyed viewing films depict life.  As time progresses, so does filmmaking and the technology behind it, causing the product to appear more and more like real life (1080p HD and 3D, anyone?).  But real life often moves too quickly for us to notice and appreciate the small things that contribute to the story.  This is where Sony’s new FS700 comes into the picture.  Its electronic focus tracking gives the camera the ability to shoot more frames per second in full HD, providing for ultra slow-motion playback.  The technology on this camera opens up a new set of doors for production, allowing us to take the boring, and often un-noticed aspects of life, making them ever so captivating.

Have you ever seen a water balloon pop?  If you have seen one in real-time, you have seen them all, and they are not so interesting to watch.  However, watch the video below, and you will not only find the image of a popping water balloon to be beautiful, but you will see that each one will have its own dynamic and movement.

FS700 480 FPS Test from Andy Shipsides on Vimeo.
Watching a real-time video of a child playing or people interacting, you may miss the look of discovery or the wrinkle of confusion in one’s face.  Slow-motion video causes us to focus on these expressions and see deeper into the souls of our subjects and notice the true beauty in these small details that we would otherwise not see.  Here’s another video shot with the FS700 pre-release that’s one of our favorites.  Even the flap of a seagull’s wing is mesmerizing to us.

Two Forty from Brighton: Sony FS700 from Philip Bloom on Vimeo.
With traditional video, the image of a dog running towards us is just that.  But in super slow-motion 1080p, it is so much more, as we are able to see and appreciate each fiber of the dog’s coat and its own movement.  Fascinating!

To quote Frank Glencairn, we’re “running with the big dogs” with this camera.  As we have seen with the Phantom Flex, a much pricier camera with similar capabilities, HD slow-motion playback is ideal for capturing sports events, concerts, nature, and more.  Months ago there was not one camcorder that could hold a candle to the Phantom Flex, but surprisingly Sony has knocked this one out of the park.  Like the Phantom Flex, the features of the FS700 provide for great low-light performance and superior dynamic range.  It boasts many similar specs including a 4K sensor and interchangeable lenses, and even has a sensor that allows for a higher maximum resolution than the Flex.  It also has build-in ND filters, which the pricier camera lacks.  At the end of the day, Sony’s camera is the best in its class, and it even tops the Phantom Flex in some categories.

With new DSLRs, like Canon’s C300, which allow for the capability of capturing video in 1080p, still photography and cinematography are constantly growing closer together. The FS700 contributes further to this evolution, as the extreme detailed slow-motion playback acts as a blend of still and real-time video shots (both of which the new camera does an excellent job as well).  Peter Prevec has even said, “this camera gives me everything I need to express my creativity.”  Needless to say (but we will say it again) we cannot WAIT until the second shipment of these cameras is ready and we can finally discover the FS700 first hand.

What types of videos would you like to see us film with the FS700?