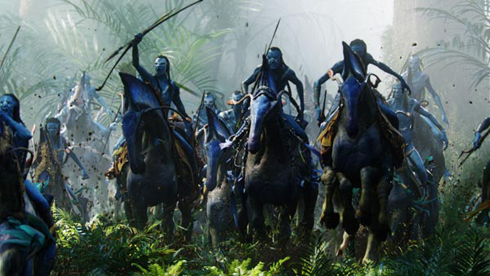 It’s been nearly five years since James Cameron’s FX-opera ‘Avatar’ hit theaters, but expectations for the sequel (or rather ‘sequel trilogy,’ as Cameron confirmed that three sequels would be produced simultaneously last December) continue to run high both in the film industry and among the general public. While details remain scarce and vague, a recent rumor regarding the use of higher frame rates offered tantalizing hints of the game-changing moves that Cameron may be planning, should he confirm the use of this largely-untested technology. While speaking with the Hollywood Reporter, special effects pioneer Douglas Trumbull confirmed that he’d spoken with Jon Landau, Cameron’s producer, though admitted he hadn’t talked to Cameron himself about the matter. Trumbull – whose credits include ‘2001: A Space Odyssey,’ ‘Close Encounters of the Third Kind’ and ‘Blade Runner’ – said that “the use of HFRs (high frame rates) for ‘Avatar’ would be very appropriate and very successful” and claimed that studios were becoming more open to using his patented technology thanks to this year’s lackluster summer box office season.

What exactly is HFR technology and how could it revolutionize cinema? Well basically it’s a novel process where footage is shot with a significantly higher image-to-second ratio, which would allow for a crisper picture and more realistic digital effects. At the end of the silent film era, the film industry adopted 24 frames-per-second as the standard projection speed in order to maximize efficiency and quality in the emerging sound film market. With the growing push to make digital projection systems the industry norm however, many forward-thinking cinema technicians have begun to wonder if the age-old 24 fps standard should be relegated to history’s dustbin alongside the silent film technology that it helped replace. In some capacity, the HFR era has already begun, thanks to the special screenings of ‘The Hobbit’ in 48 fps back in 2012.

So when can we expect to see HFR screenings become the norm? Well as always, it comes down to money. Trumbull’s first attempted to win the industry over to his new technology way back in the early 1980s and found his efforts thwarted by profit-conscious theater owners who balked at the idea of install expensive new equipment for a single film release. Today, their concerns remain largely unchanged despite the HFR release of ‘The Hobbit.’ Will HFR tech really bring in more customers? And will Hollywood be making HFR films on a regular basis 5, 10 or even 3 years from now? What about the complaints we heard about those 48 fps screenings of ‘The Hobbit’? We heard reports that the picture quality looked off and made some people uneasy?

For his part, Trumbull takes these criticisms in stride and claims that his technology won’t fall victim to the same picture issues as ‘The Hobbit.’ “’The Hobbit’ fell victim to the ‘uncanny valley’,” Trumbull stated, referring to the idea that comfort levels decrease sharply as virtual characters and effects approach, but ultimately fall short of, completely realistic levels of detail. “But when you dramatically increase the frame rate to 120 fps you jump over the valley to a whole new territory.” Whether or not this turns out to be the case remains to be seen, but Trumbull could hardly hope for a better champion than James Cameron, who’s made groundbreaking FX one of his trademarks. Theater owners will also no doubt acquiesce to the fiscal demands of HFR tech should he choose to use it, thanks to the lucrative 3-D market that ‘Avatar’ helped
jump start.

Much like Sarah Connor, Cameron appears to hold the future in hands right now. One can only hope he acts wisely.